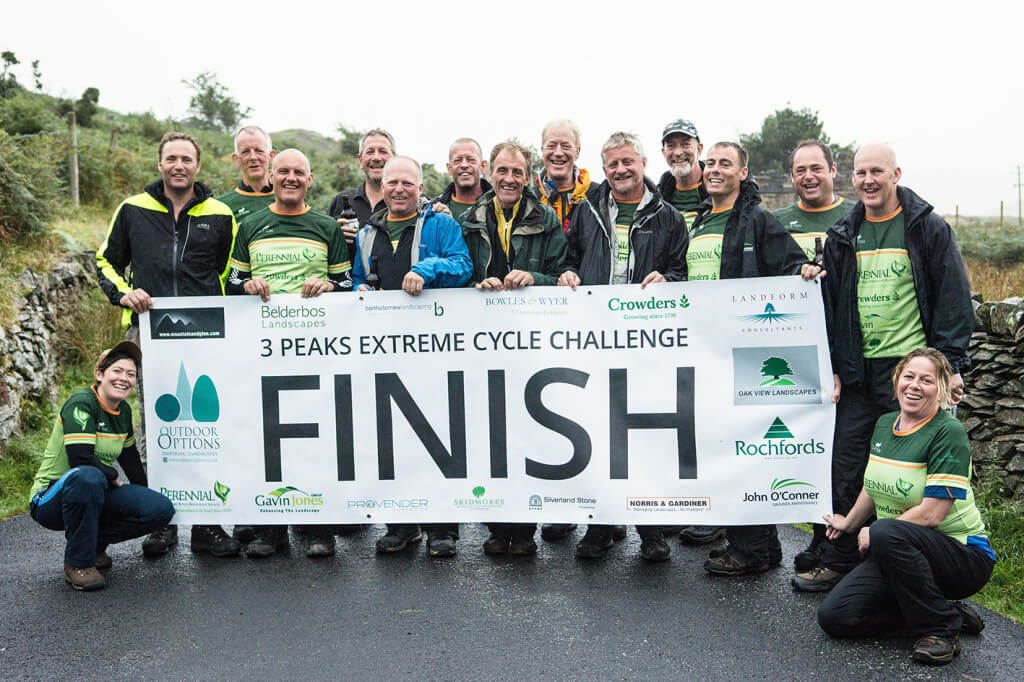 A team of intrepid landscapers and nurserymen have completed the challenge of their lifetimes, raising funds for horticulture trade charity Perennial. The 3 Peaks Extreme Challenge team endured six gruelling days climbing mountains and cycling 450 miles, finishing their epic journey on 11 September. They have so far raised over £16,000 to help Perennial support people in the horticulture industry during their times of need and this total is still growing.

The team, led by Brian Herbert, Managing Director of Outdoor Options and Richard Gardiner of Norris & Gardiner, climbed the three highest UK peaks (Ben Nevis, Scafell Pike and Snowdon) and cycled distance between. The challenge ran as a precursor to HortAid, Perennial’s new annual fundraising week (21 – 29 September) which is an opportunity for the horticultural industry to show their support for industry colleagues in difficulty.

Aside from some very tired bodies and aching limbs, the whole team successfully completed the challenge. Speaking about this great achievement, Brian said;

“We are incredibly proud to have completed this challenge and I feel honoured to have been part of a team that has shown such great commitment. We have all learnt so much from it and have so many great memories. The whole time while we were out there, the main motivator was knowing the donations were rolling in and that this money will help Perennial in its valuable work supporting people in our industry. A huge thank you to our amazing support team and everyone who has donated so far. “

The challenge was not without incident and adventure, even getting to the start line was an endurance test after a chaotic train journey up to Scotland. Once en route, the team put in long days on foot and bike, finally reaching the finish line at the base of Snowdon in mist and driving rain. The challenge is still not over as the 3 Peaks Extreme team has vowed to keep fundraising for their industry charity until the end of the year, so they are asking colleagues in the industry to dig deep to help them hit their target of £30,000.

“Well done to the team for getting through this enormously tough challenge. It was a fantastic example of what the wonderful people in this industry can do and it really kicked started our Hortaid 2013 campaign. Horticulture is an industry that relies on the physical fitness of it workers and this team has pushed their physical strength to the limit. The money they have raised is vital in helping us maintain our services for horticulturists in need and their families and there is still time to show your support and make a donation.”

To donate to the challenge visit www.justgiving.com/3PeaksExtreme

To donate online visit www.justgiving.com/3PeaksExtreme or text NUTS67 to 70070.