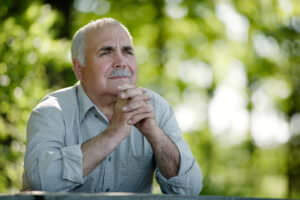 George* first approached Perennial 15 years ago when he was forced to retire early from his gardening career due to ill health. He and his wife, who had a progressive degenerative disease, were living on welfare benefits and their debts were mounting. Their GP suggested they contact Perennial for help with purchasing a mobility vehicle, as George’s wife was unable to leave the house.

The Perennial caseworker visited them at home, identified several benefits they needed to access and helped them apply for these. The couple were also awarded an on-going weekly benefit payment by Perennial, and the caseworker applied to two other charities for grants towards the cost of the mobility vehicle.

Sadly George’s wife passed away in January 2015. Perennial was there to help him help sort out his finances. He received an overpayment of benefit notice from the local authority shortly after his wife passed away demanding repayment. He was terribly distressed as he was intending to spend his small amount of savings on a headstone for his wife’s grave. The caseworker appealed against the decision to recover the money and eventually won his case.

George is now able to manage on his income and puts a small amount of money aside each week. He is teaching horticulture on a voluntary basis at his local community centre. He is aware of Perennial’s lasting support and he has finally purchased the headstone for his wife’s grave that meant so much to him.

If you know of someone who needs help, please contact Perennial today.