For over 30 years, Yorkshireman Stephen dedicated his working life to gardening until he was diagnosed with cancer in his sixties. Undergoing invasive treatment, unable to work and fearing he might lose his home he turned to Perennial.

Stephen’s prostate cancer diagnosis in 2017 came as a huge shock and left him fighting for his life. Following surgery and undergoing treatment he was left feeling very weak. His physically demanding work as the sole gardener on an 8-acre estate was no longer possible, he was placed on sick leave and his income halved overnight.

“The treatment for my cancer was horrendous but I fought back and wasn’t going to let it beat me. What I wasn’t prepared for was the struggle I had living off sick pay. I’d always lived frugally and within my means, but this time it just wasn’t enough, and I faced the stark reality that I might lose my home.”

Thankfully, a friend also working in horticulture encouraged Stephen to get in touch with Perennial.

“I sat for a while, unable to phone Perennial through sheer embarrassment. I had lost all control of my life of which I was so proudly independent. I had never asked for help before, hard work had got me to this point, but after a short while speaking to Perennial I could feel this huge burden being lifted.”

The call Stephen made to the Perennial helpline was a huge turning point for him. Stephen’s caseworker worked closely with him and acted on his behalf to claim support so that he could receive the benefits he was entitled to. As a result, he was awarded universal credit which meant he could afford to stay in his home and focus on getting better.

“Anything I didn’t understand or was unable to do my caseworker dealt with swiftly and professionally. The additional £26 I received in government support each month helped me enormously and I have no doubt that without Perennial I would have lost my home. My life was on the line and Perennial saved me.”

The burden of illness and the pressure it places on finances for people like Stephen can be relentless. But the expert team at Perennial can help reduce the stress by acting on behalf of the service user and completing complex paperwork, often resulting in a better outcome.

“My caseworker would call me to go through all the details of the online forms, and with my permission they completed them on my behalf. I’d never really been one for computers and with Perennial’s help I didn’t need worry about it now.”

After 12 months of pain, Stephen started to feel well again. He remains in remission and now retired enjoys regular trips to the garden centre. He hopes that his story will inspire you to get in touch if you need help or support Perennial to help people like him.

“I want to shout from the highest rooftop and let the world know how Perennial has helped me get my life back. My message to anyone in the horticultural industry, should they find themselves in a downward spiral, is to pick up the phone and call Perennial.”

If you, or someone you know needs help, find out more about Perennial’s free and confidential services for anyone who has worked, or works in the horticulture sector in the UK. This includes gardeners, nursery owners and workers, garden designers, landscapers, arborists, foresters, garden centre staff, commercial growers, turf maintenance specialists and many more. Call us free in confidence on 0800 093 8543 or complete our contact form for help. 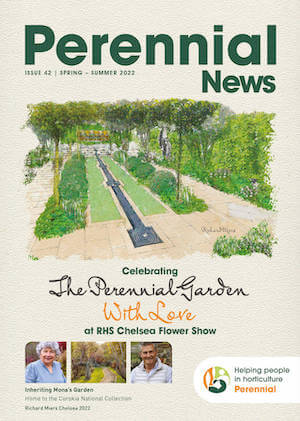