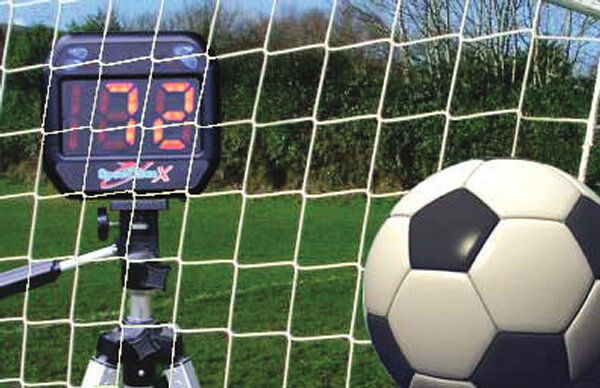 Who will top the leaderboard with the fastest kick of the show?

STOP PRESS: We’re delighted to say that the Kickathon is being sponsored by Complete Weed Control and Everris.

Fancy yourself as a penalty taker? Think you could have been an asset to the England team at this summer’s World Cup? If you are attending SALTEX 2014 (2 – 4 September) you’ll have your chance to find out. Visit the Perennial stand H85 to get involved – and raise some money for horticulturists at the same time.

“We wanted to have a bit of fun with SALTEX visitors and fellow exhibitors this year to celebrate our 175th anniversary. With football fever at an all time high following the Brazil World Cup we thought we’d see if those who usually look after the pitches can also take the penalties – we expect the competition to be strong!”

Commenting on the sponsorship, Ed Carter, Sales and Development Manager, Turf and Amenity for Everris said:

“Everris are delighted to be working in conjunction with CWC to sponsor Perennial at SALTEX 2014. Working in the turf industry can often be very demanding both physically and mentally. Quite often it sees people working long or unsociable hours and often for a level of pay that is not commensurate with their efforts.

“Unfortunately these stresses and strains or plain bad luck can affect anyone of us at any time and can often mean we’re unable to perform our duties as we have before. It’s at times like these that the support offered by Perennial can be invaluable and we hope that the Everris and Complete Weed Control sponsorship to the charity will provide help to those who need it most.”

“Along with Everris, CWC are delighted to sponsor the SALTEX Kickathon. Horticulture can be a tough industry to work in and Perennial is a charity that steps in to help when people are working in horticulture and their families face challenges such as sickness, disability, poverty, financial hardship and old age.

“We hope that the sponsorship will go a small way to help the industry.”

The SALTEX Kickathon forms part of HortAid 2014, Perennial’s annual fundraising campaign which this year hopes to raise £175,000 to help horticulturists in need.

Perennial’s wide-ranging benevolent services are regularly described by clients simply as a ‘lifeline’ but without the financial support of the UK horticulture industry, their long-term continuation is threatened. The 175th anniversary appeal is seen as the first step in galvanising future relationships with supporters and a stepping-stone to reaching a record number of clients in 2014/15.

SALTEX runs from 2 – 4 September. It is the annual Sports Amenities Landscaping Trade Exhibition. Perennial will be on Stand H85 and will be asking for voluntary donations to the charity in order to enter the Kickathon. There will be a daily winner, announced at the end of each day of the Show.

Perennial celebrates its 175th anniversary in 2014 and is on track to raise £175,000 for horticulturists in need. Established in 1839, The Gardeners’ Royal Benevolent Fund, or Perennial as it is now known, helps everyone working in and retired from horticulture, including landscapers, gardeners, garden designers, green keepers, tree surgeons, groundsmen, seed and turf growers, those involved in intensive production horticulture, parks and gardens staff and many more, and their families during times of crisis. The charity provides a range of support to people experiencing hardship whether through debt, illness, disability or old age. In the current economic climate this help is needed more than it ever was; in 2013, Perennial helped over 1,200 people, over 85% of whom were still of working age.

All of Perennial’s funds come from the generosity of the horticulture trade and the garden-loving public. Perennial is calling on everyone who cares about looking after the people that care for our green spaces to get involved by raising £175 for 175 this year. To find out more about the work of Perennial and ways to get involved with fundraising during 2014, please visit www.perennial.org.uk, email info@perennial.org.uk or call one of the team on 0800 093 8510.

Perennial staff take on Great Wall to raise £6,000 for charity

Party for Perennial kick-starts HortAid 2018 with over £10,000 raised on the night

Industry gears up for Party for Perennial

It’s #WorldNakedGardeningDay and the Grubby Gardeners are back in style…