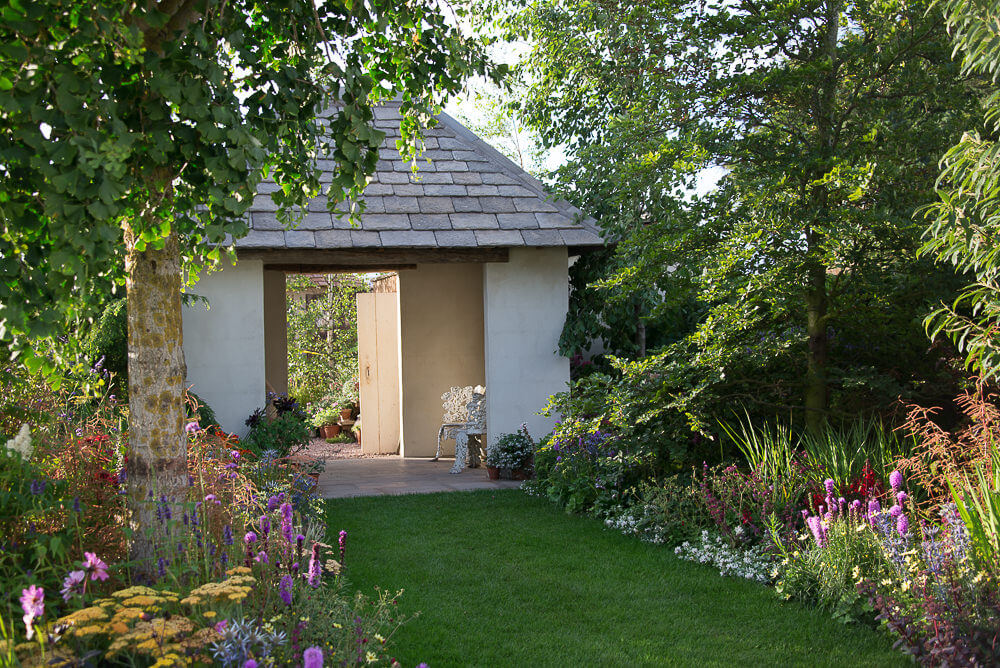 The Perennial Legacy Garden has been awarded a Gold Medal and named Best Show Garden at the RHS Flower Show at Tatton Park. Perennial, the charity dedicated to helping horticulturists in need, has created the garden to mark the launch of its new legacy fundraising campaign.

Designed by Paul Hervey-Brookes, the garden reflects elements of an English country estate, inspired by Perennial’s heritage as an organisation born from the great country estates of Britain. The RHS judges were wowed by the garden’s long herbaceous borders vibrantly planted with a rich palette of traditional and contemporary perennials. The design also includes a traditional pavilion for enjoying the garden, while the gardener’s bothy and nursery beds represent the gardener’s domain.

Anita Bates, Director of Marketing and Development at Perennial says:

“We are thrilled and honoured to receive this accolade, which is the culmination of the huge team effort behind the garden. We would like to thank our many supporters and suppliers for their generosity, without whom this garden would never have happened.

“Perennial’s foundations as a benevolent charity come from the great estate gardens of the 19th century and our show garden reflects this while highlighting the continued need to support those in UK’s horticultural community today who have nowhere else to turn. We hope visitors to the show enjoy the garden and it will prompt them think about their legacies and the difference their help can make to the lives of others.”

Supported by Glendale as lead sponsor, the garden has been a real team effort thanks to the help and support of a wide range of industry partners including Rolawn, Travis Perkins (Glossop Branch), Readyhedge, Bulldog Tools (Rollins Group Ltd), Wotmix cement, Bradstone and Haddonstone, as well as contractor GK Wilson Landscapes who built the garden.

“It’s an honour to be supporting Perennial at the RHS Flower Show at Tatton Park, and what a success it has been. It is our first time taking part in the show and we’re especially thrilled to be celebrating the anniversary of our 25th year in business with this Gold Medal.”

“It has been a wonderful experience working with Perennial and finding out more about the valuable work the charity does helping those in dire straits. As my first garden at Tatton Park and my only UK show garden this year, our Gold Medal is fabulous news and being named Best in Show is just the icing on the cake.”

Perennial was established in 1839 by the owners of Britain’s great country houses to look after the people who worked in their gardens. Today Perennial is the UK’s only charity dedicated to helping people who work in horticulture, and their families, when times get tough. Legacy donations make up over half of Perennial’s voluntary income, playing a vital role in ensuring the charity is able to continue providing support for those in need.

For further information about the Perennial Legacy Garden visit: https://perennial.org.uk/garden/perennial-legacy-garden/

Perennial offers free, confidential advice and support to everyone working in or retired from horticulture and their families, including gardeners, landscapers, nursery and garden centre staff, parks and grounds care staff and tree surgeons. People turn to Perennial for financial and emotional help in times of need because of disability, sickness, financial hardship and old age – although increasingly those under retirement age are seeking their assistance. Many individuals describe the services Perennial offers as a ‘lifeline’. The work of Perennial depends on voluntary donations from the horticultural industry and the garden-loving public. Find out more at www.perennial.org.uk. Follow on Twitter @PerennialGRBS or find us on Facebook.