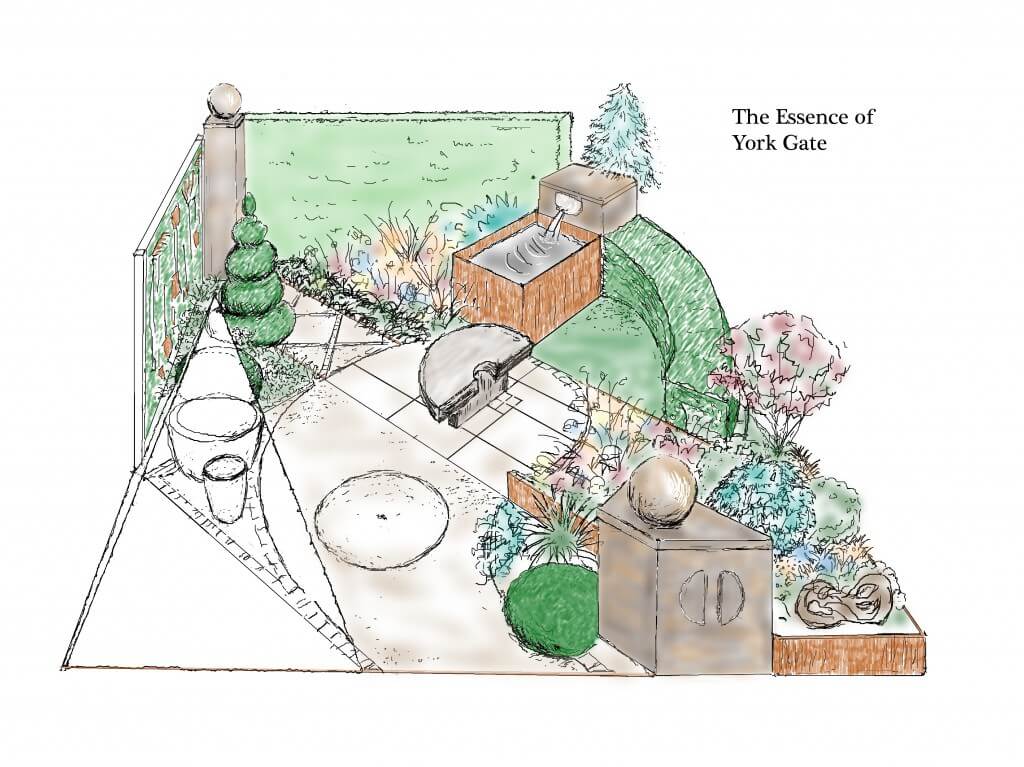 To help mark its 175th anniversary, national horticulture charity Perennial will be creating a show garden at the Harrogate Spring Flower Show based on its garden York Gate near Leeds. Perennial will also be the official show charity for the event, helping raise awareness and funds for a charity whose services are needed now more than ever.

The Perennial garden entitled “The Essence of York Gate” captures the character and charm of York Gate, as well as highlighting the important work Perennial does in supporting everyone working in or retired from horticulture during times of crisis.

An intimate and exquisite garden inspired by the Arts & Crafts movement, York Gate in Adel, North Leeds is widely considered one of the most innovative small gardens in the country. Though just one acre in size, it contains 14 distinct ‘outdoor rooms’ divided by hedges, each with its own intricate design and character. The show garden echoes some of the well-known features of York Gate and is designed by local garden designers Lois Evans and Shanet Alexander, who also works as a gardener at York Gate.

To raise funds at the show, Perennial will be running the Plant and Product Crèche and will have a trade stand in collaboration with Bulldog Rollins, selling Perennial’s fabulous range of gardening gifts and products. To further highlight the work of Perennial, Jim Buttress, judge at the show, Trustee of Perennial and expert on BBC2’s The Big Allotment Challenge which starts on 15 April, will be doing special slots for the charity each day in the Dig It Garden Theatre.

“We are thrilled to have this opportunity to highlight the work of Perennial at the Harrogate Spring Flower Show during our milestone anniversary year. All of our work depends entirely on the generosity of our supporters and we have pledged to raise more funds than ever this year to help safeguard our services for those who most need them. York Gate is much loved by many of its visitors so we hope that getting a glimpse of it through our show garden will inspire more people to come and visit the garden for themselves.”

The “Essence of York Gate” is laid out in a Fibonacci Spiral – a mathematical principle often seen in nature. This shape divides the space into areas that pick out some of the key features that make up the garden in Adel. The unique yew ‘sails’ from York Gate are expressed by a sedum-clad structure at the front of the garden, a box spiral and sphere represent the famous Herb Garden at York Gate, curved box hedging mimics Sybil’s Garden and characteristic stone setts and hornbeam hedges are incorporated.

The planting is inspired by the Dell in Spring, while York Gate’s canal, ponds and streams are represented by a rust coloured Cor-ten steel tank fed by a mythical looking lion mask, symbolic of the stone Dolphin supplying the canal. The rust colour is picked up in some of the planting, balanced by blue flowers and glaucous foliage of other plants.

Ivy clad fencing supports old tools, rusting but still functional, symbolising the work Perennial does in supporting those working in horticulture, providing what is often described by its clients as a ‘lifeline’ when the going gets tough.

Premier Gold and Best in Show for Perennial at Harrogate Spring Flower Show!