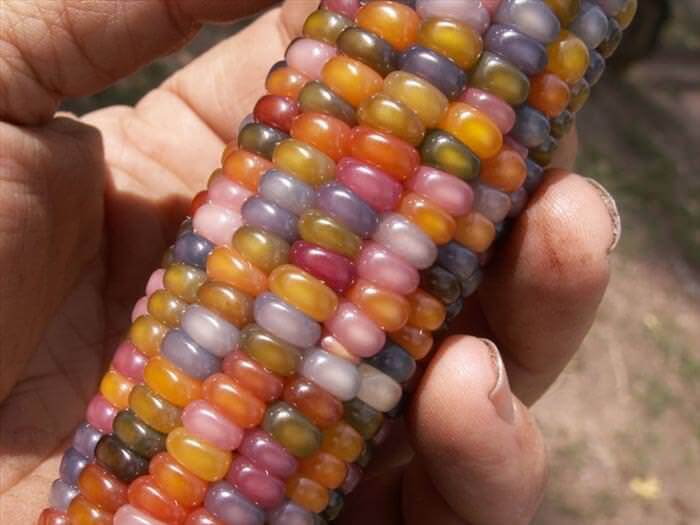 They’ve been a sensation in the USA, and now you have the chance to support HortAid and grow some amazing Glass Gem Corn!

Thanks to Which? Gardening researcher James Robbins, we have 9 batches of 10 glass gem corn plants for a special HortAid auction.

At a cost of £25, you can grow something truly unusual and help our year-long fundraising appeal change lives for the better.

DID YOU KNOW: £25 could pay for a school uniform for the child of someone struggling to make ends meet.

How it came about

The story of glass gem corn started in the US in 2012. James explains, “Oklahoma farmer Carl Barnes began to grow old corn varieties as a way to reconnect with his Native American heritage.

“Through breeding and selection Carl began to isolate older strains of the corn, and began to exchange seeds with other corn enthusiasts around the USA. Through careful selection, Carl developed a rainbow coloured strain which he showed to fellow corn enthusiast Greg Schoen. They exchanged seeds and became close friends.

“Greg began to plant larger areas of the corn and even crossbred it with traditional varieties, to create new strains which displayed even more vibrant colours.

“I was able to get some of the seeds last year and grew them in my back garden. I had only five plants so kept them away from other varieties and hand pollinated them to keep the strain pure. Around 3 months after planting I had a few small but good cobs which as I pulled back the husk, revealed their coloured gems underneath.

“I saved the seed and this year I have been able to grow even more plants – so many, I have 90 more than I have room for!”

Having been so successful in producing glass gem corn in the UK, James’ first thought was to use them to support the only charity to support everyone involved in the UK horticulture industry.

“I thought it would be great if Perennial sold my excess plants to raise some money to continue their work to help horticulturists. This plant is a great project to start on if you are interested in the breeding and selection of plants and seed saving.”

With only 9 batches of this unique corn on offer, the auction is going to be run on a first-come, first served basis:

How to grow the corn

James has some advice for the lucky winners of the auction. “The plants have been hardened off for a few weeks, so are ready to be planted out immediately in the garden:

And for eating? James recommends that they can “be eaten as corn meal or used for popping”; but I strongly advise you to collect the best coloured seeds to plant again next year, and you can select seeds of different colours to begin creating your own favourite strains!”