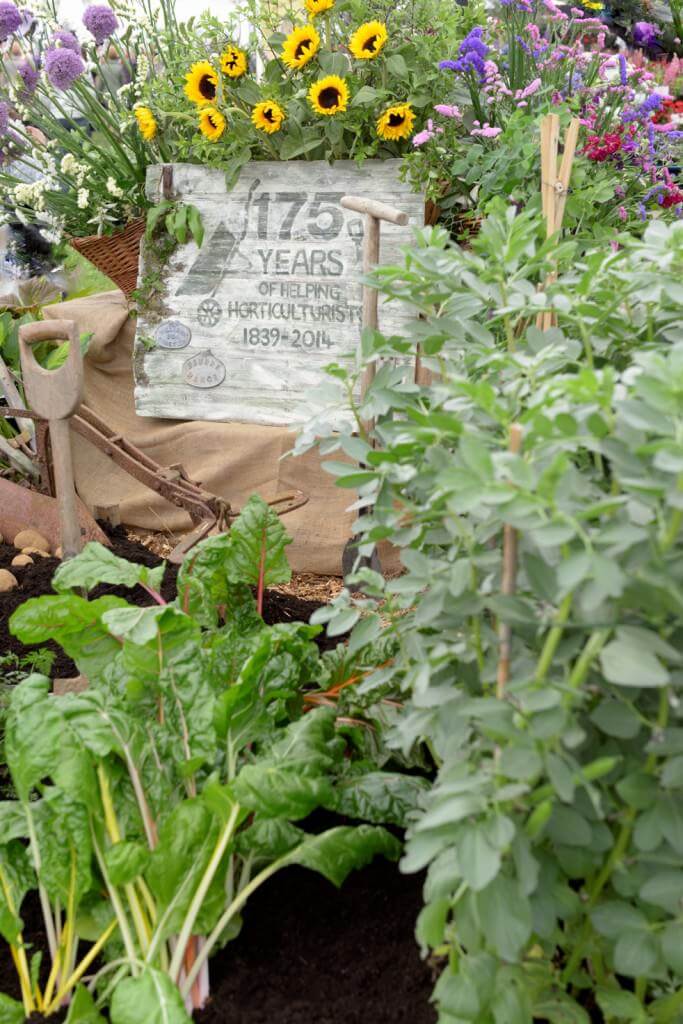 As Perennial continues a highly successful flower show season, the charity is celebrating being awarded a Gold Medal at the Royal Cornwall Show. The exhibit was created by George Kestell from BBC Radio Cornwall’s gardening team, who is also Honorary Secretary for Perennial in Cornwall, leading volunteer activity for the charity in the region.

The Gold Medal winning display was created as part of Perennial’s 175th anniversary celebrations, to help raise awareness of the only UK charity dedicated to helping horticulturists. Taking the anniversary as its inspiration, the garden was based on a Victorian scene incorporating a colourful vegetable patch alongside cottage garden planting. It included eye-catching varieties such as the purple-podded Pea ‘Shiraz’, as well as a plough that had belonged to George’s great grandfather. Many of the plants were grown by one of the volunteers Derek Yeo.

This was the 11th garden that George had created at the Royal Cornwall Show for Perennial, but the first time the team had won gold. The prize money for winning the Gold Medal has been donated to Perennial’s anniversary appeal.

George Kestell comments: “We are delighted to have been awarded this medal, especially during Perennial’s milestone anniversary year. People working in horticulture are often undervalued and need additional help, which is why I think it is crucial to support our trade charity. We want more and more horticulturists to know that Perennial is there for them to turn to whenever if ever they are in need and we did in fact speak to several horticulturists at the show who had not heard of Perennial before.”

(Images are with thanks to Porcupine PR who attended the show and took some lovely shots of the garden.)

Perennial celebrates its 175th anniversary in 2014 and has set a target to raise £175,000 to go toward helping horticulturists in need. Established in 1839, The Gardeners’ Royal Benevolent Fund or Perennial as it is now known, helps everyone working in and retired from horticulture, including landscapers, gardeners, garden designers, green keepers, tree surgeons, groundsmen, seed and turf growers, those involved in intensive production horticulture, parks and gardens staff and many more, and their families during times of crisis. The charity provides a range of support to people experiencing hardship whether that is through debt, illness, disability or old age. In the current economic climate this help is needed more than it ever was; in 2013, Perennial helped over 1,200 people, over 85% of whom were still of working age.

Perennial relies on the generosity of the horticulture trade and the garden-loving public to continue to support horticulturists in need. Perennial is calling on everyone who cares about looking after the people that care for our green spaces to get involved by raising £175 for 175 this year. To find out more about the work of Perennial and ways to get involved with fundraising during 2014, please visit www.perennial.org.uk, email info@perennial.org.uk or call one of the team on 0800 093 8510.

HortAid 2018 gets under way at the Party for Perennial

Make a beeline for new Perennial products at Chelsea